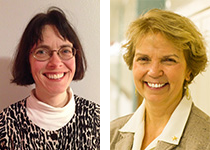 Milwaukee area educators Jean Creighton (Director of the Manfred Olson Planetarium at the University of Wisconsin-Milwaukee) and Kathy Gustavson (science teacher at Nicolet High School, Glendale) have been selected by NASA as one of 12 Airborne Astronomy Ambassador teams for 2014.

As part of their role as Airborne Astronomy Ambassadors, the two educators will fly in late March onboard NASA’s SOFIA (Stratospheric Observatory for Infrared Astronomy), a highly modified Boeing 747SP jetliner fitted with a 100-inch (2.5‑meter) effective diameter infrared telescope. SOFIA is the largest flying observatory in the world. 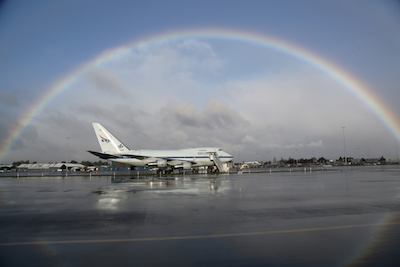 While flying at altitudes between 39,000 and 45,000 feet (12–14 kilometers), the side of the 747 opens to allow infrared light from distant astronomical objects to reach the telescope. The aircraft flies at such high altitudes in order to get above most of the water vapor in Earth’s atmosphere, which absorbs infrared light (and prevents much of that light from reaching the lower atmosphere). Weather permitting, Creighton and Gustavson will take two 10-hour flights on SOFIA.

Creighton says that she has an affinity for infrared astronomy because while working as a postdoctoral researcher at CalTech, she served as the scheduler for another infrared telescope, assigning telescope time to various research teams. “One of the most exciting things we can do with infrared telescopes nowadays is we can see some of the very youngest galaxies in the whole universe,” Creighton says.1

For their March flights, Creighton and Gustavson will be joined by a SOFIA team astronomer and learn firsthand how infrared astronomy is conducted using the SOFIA airborne telescope. After they complete their flights on SOFIA, Creighton and Gustavson will bring what they learn back to their classrooms and into the Milwaukee area community to promote science literacy.

SOFIA is a joint project of NASA and the German Aerospace Center (DLR). To date, the Airborne Astronomy Ambassador program has flown 15 teams totaling 31 educators from 17 states. Additional information about SOFIA is available from NASA’s SOFIA mission web page.

The planetarium, adjacent to the Physics Building on the UWM campus, is one of Milwaukee’s hidden gems. Under the guidance of director Jean Creighton, it offers shows for the general public, as well as special programs for school groups and private events.

Friday Night Show — Fridays 7:00–7:55 PM. The current show, Colorful Nebula, runs through March 7. All shows are open to the public and admission is $2. See the show schedule for dates and topics of future shows.

AstroBreak — Select Wednesdays 12:15–12:45 PM. Free and open to the public, each AstroBreak explores a special astronomical topic, plus provides a look at the current night sky. See the AstroBreak schedule for dates and topics.

Stargazing — Guided stargazing programs are held periodically on the roof of the UWM Physics Building, providing participants with views through a telescope of the moon, planets and other objects of interest. Stargazing is free and open to the public. See the stargazing schedule for dates and times.

Art in Space — The planetarium’s annual Art in Space fundraiser will take place on Saturday April 12, 2014, 6:30–8:30 PM. The event includes a silent art auction and a special planetarium show. Advance tickets are $10.