Welcome to the March issue of Stargazing, an ongoing series of monthly guides to what’s happening in the night sky, as well as recent news from space exploration and a preview of what major space events are scheduled during the coming month.

Comet PANSTARRS: Much Ado About Nothing? 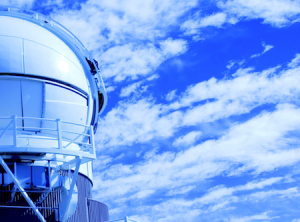 The biggest sky event during March is Comet PANSTARRS, which should achieve its maximum brightness during the second week of March. Unfortunately, so far PANSTARRS been significantly dimmer than originally predicted and what had been anticipated as the brightest comet in six years may not even grow bright enough to be visible to the naked eye. My article Year of the Comets (Feb. 19) takes a closer look at this particular comet and includes a viewing chart listing where and when to look if you want to try and spot Comet PANSTARRS.

Planets are scarce in March’s nighttime skies, with only Jupiter and Saturn visible this month.1 Jupiter will be the brighter of those two, although its brightness fades as the month progresses. An interesting sight occurs on the evening of March 17, when the moon will slowly slide in front of Jupiter and block it from view.2 As you’re drinking your mandatory pint of Guinness for St. Patty’s Day, make sure to look to the west right around 9:00 PM Central Time as Jupiter and the Moon begin their Irish jig.

Saturn rises before midnight local time all month and is visible in the southeast. Even though it is not as bright as Jupiter during the first part of March, Saturn is still among the brightest objects in the sky. Saturn’s rings currently are tilted at about 19° (as seen from our vantage point here on Earth), which makes this an especially good time to view the ringed planet through a telescope or binoculars. 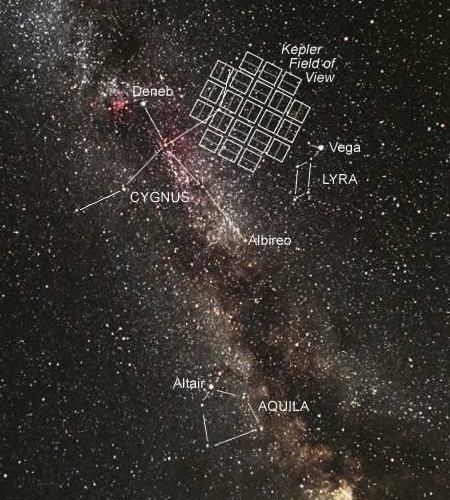 The small area of sky where Kepler is searching for exoplanets.

NASA’s Kepler spacecraft continues to find planets orbiting other stars (known as “exoplanets”). Just this week (February 20, 2013), Kepler mission scientists reported the discovery of the smallest planet yet found around a star similar to our Sun. The planet is about the size of Earth’s Moon, or just one-third the size of Earth. Tiny planet Kepler-37b is one of three planets found orbiting the star Kepler-37, which is 210 light years distant. One of the other planets (Kepler-37c) is slightly smaller than Venus, while the third (Kepler-37d) is about twice the size of Earth.

All three planets orbit in — or very near — the habitable zone for star Kepler-37. That means the three planets are about the right distance from their star that water potentially could exist in liquid form on the surface of one or more of them. Scientists suspect, however, that tiny Kepler-37b does not have an atmosphere. Like Earth’s Moon, that planet is so small that it’s gravity would not be able to hold onto an atmosphere for any significant length of time.

The three planets orbiting Kepler-37 are just the most recent of a long list of confirmed planets and potential (candidate) planets that are still being confirmed. In January, the Kepler team announced 461 new candidates currently undergoing follow-up analysis to determine if they are actual planets. Of those planet candidates, 351 (or 43%) are approximately the size of Earth.

As of right now3, there are a total of 909 confirmed exoplanets and another 2,740 candidates working their way through the confirmation process.4 But don’t blink! Those numbers are increasing on an almost daily basis.

Tool Time on Mars with the Curiosity Rover 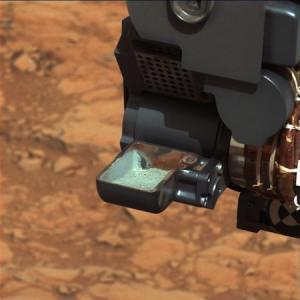 This image from NASA’s Curiosity rover shows the first sample of powdered rock extracted by the rover’s drill.

While Kepler has been focused on planets dozens or even hundreds of light years away, NASA’s Curiosity Rover has been busy exploring the planet just next door — Mars. During February, Curiosity collected the first sample ever from inside a rock on another planet. Curiosity drilled a 2.5 inch hole into a piece of Martian bedrock on February 8, 2013, then took powder from within the hole and will analyze it using several scientific instruments contained within the rover.5

Eventually Curiosity should be able to determine the chemical and mineralogical makeup of the sample. Since the sample comes from a fine-grained, veiny sedimentary rock, analysis may provide information about the potentially wet environment present when the rock first formed, which in turn will help scientists better understand whether conditions were ever favorable for microbial life in that location.

Although it’s not in the news very often anymore, at any given moment there are several humans living on board the International Space Station (ISS). While it’s not a permanent colony on the Moon or Mars, it does represent the first time in history where there always are human somewhere off of Earth. Right now there are six astronauts6 from three countries (the US, Russia and Canada) on board the ISS. Collectively this group of astronauts are known as Expedition 34.

The ISS is the third brightest object in the sky (after the Sun and Moon), which means you can watch it fly over if you know when to look. NASA offers a “Spot the Station” service which alerts you several hours before the space station will pass over your location — you can sign up for alerts at spotthestation.nasa.gov/

This past week, Griffin Communications Group issued a press release on behalf of the Inspiration Mars Foundation, a “newly founded nonprofit organization led by American Space traveler and entrepreneur Dennis Tito.” According to the press release, a news conference next Wednesday (February 27, 2013) will announce a historic 501-day mission to Mars that will take place starting in 2018.

Here is the main section of the press release:

The Inspiration Mars Foundation, a newly formed nonprofit organization led by American space traveler and entrepreneur Dennis Tito, invites you to attend a press conference detailing its plans to take advantage of a unique window of opportunity to launch an historic journey to Mars and back in 501 days, starting in January 2018. This “Mission for America” will generate new knowledge, experience and momentum for the next great era of space exploration. It is intended to encourage all Americans to believe again, in doing the hard things that make our nation great, while inspiring youth through Science, Technology, Engineering and Mathematics (STEM) education and motivation.

The official announcement will take place next Wednesday at the National Press Club. Based on evidence website IO9 has collected, the mission likely would not include a landing on Mars, but rather a flyby of the red planet. In addition, it looks as if Tito’s Mission for America might employ a modified SpaceX Dragon spacecraft launched on a Falcon Heavy rocket.

Five years is an incredibly ambitious time frame to plan, construct and launch what would be the most complex human space mission ever attempted, especially one relying entirely on private funding and R&D. Is it possible? Perhaps.7 We will find out much more at next week’s press conference.