Comet PanSTARRS has arrived and now is visible to the naked eye! Despite recent uncertainty, it appears this comet is likely to put on a show.

As reported in Year of the Comets, Comet PanSTARRS is the first of two naked-eye visibility comets to appear in Earth’s sky during 2013. And despite concerns expressed by comet watchers as recently as mid-February, Comet PanSTARRS has grown bright enough to be visible without a telescope or binoculars. It probably still won’t achieve the maximum brightness originally predicted when it first was discovered, but Comet PanSTARRS will be bright enough to put on a small show for stargazers. 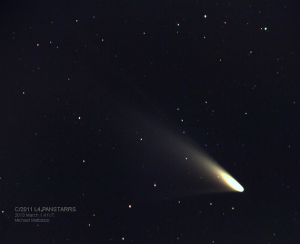 This photo of Comet PanSTARRS was taken in Australia with a 300mm telephoto lens on March 1, 2013. Three tails are visible: the long, Type II dust tail, a short, faint Type III tail (immediately left of the comet’s head) and a faint ion tail that nearly parallels the main tail along the right side. The green streaks are out-of-focus power lines in the foreground. Credit: Michael Mattiazzo

Comet PanSTARRS crossed the threshold and grew bright enough to be a naked eye object on Thursday (February 28). As of last night (Friday, March 1), multiple observers report that Comet PanSTARRS has reached a magnitude of just below +2.0 (or about the same brightness as Polaris, the North Star).

The comet will achieve its maximum brightness around March 9–10 when it reaches perihelion.1 In addition, Comet PanSTARRS reaches perigee (it’s closest approach to Earth) next Tuesday, March 5.

Where and When to Look

For most locations in the Northern Hemisphere (including Milwaukee), the best days to look for Comet PanSTARR will be right around March 12. On March 12, the Moon will be a very slender crescent hanging low above the western horizon just after sunset. (In Milwaukee, sunset on March 12 occurs at 6:55 PM.2 ) As twilight fades and the darkness deepens, look at the moon. The head of Comet PanSTARRS should be visible about 4° to the left of the moon. (Extend your arm toward the Moon — 4° is approximately the width of 2–3 fingers at arm’s length.) If you are in a location with dark skies (beyond city lights), you also may be able to spot the comet’s tail stretching away from its head — that tail lines up with the Moon on March 12. Comet PanSTARRS will remain above the western horizon for about an hour on March 12.

To spot Comet PanSTARRS on other evenings during March (since the Moon moves across the sky from one night to the next and only appears alongside the comet on March 12), refer to the Comet PANSTARRS Finder Charts on FreeStarCharts.com. Comet PanSTARRS won’t be around for long. It likely will remain visible to the naked eye only through the first or second week of April, so watch it while you can! And if this particular comet seems less than spectacular, remember that Comet PanSTARRS is just a small warmup for the major show that Comet ISON is expected to deliver during November and December.3