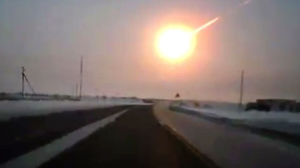 The Russian meteor that slammed into Earth’s atmosphere on Friday (injuring over 1,000 people) hit just hours before larger Asteroid 2012 D14 made its closest approach to Earth. Asteroid experts initially have said there was no connection between the two events1 and that it was just a “cosmic coincidence“2 that both events occurred on the same day.

About the terminology used in this article:

What is the difference between an asteroid, meteoroid, meteor, and meteorite?

Asteroid = A small rocky object that orbits the Sun. Asteroids are composed of rock and metal, but they also can contain organic compounds. Although there still is no formal agreement on a definition, asteroids are usually thought of as small solar system objects larger than 10 meters which are not comets. (Asteroids are inactive bodies, while comets have ice on them that can vaporize in sunlight and form a tail of gas and dust.) The International Astronomical Union prefers the broader term “minor planet.”

Meteoroid = A small rock or particle of debris in our solar system, usually defined as ranging in size from dust to around 10 meters in diameter. (Anything larger than 10 meters is usually referred to as asteroid.)

Meteor = A meteoroid (or small asteroid) that burns up as it passes through the Earth’s atmosphere.

Near Earth Object (NEO) = Any solar system object (asteroid, meteoroid, comet, human spacecraft and satellites, space junk) whose orbit brings it into close proximity with Earth. In simple terms, these are all of the objects that potentially can collide with Earth.

Given the apparently astronomical3 odds against these two events happening within hours of each other, I was curious enough to want to take a closer look for myself.4 Here is what I learned.

Odds of Such a Coincidence

The small asteroid that entered Earth’s atmosphere and blew apart over the Chelyabinsk region of Russia was approximately 15 meters (or about 50 feet) wide and 7,000 metric tons in weight. It is estimated that a Near Earth Object (NEO) in that size range impacts Earth an average of once every 100 years. The last object that size to hit the Earth was the NEO that exploded over Tunguska5 in 1908 and flattened millions of trees over 820 square miles of remote Siberian forest. The 105 years between the Tunguska event and Friday’s meteor over Russia fits well with the estimate that these events occur about once every 100 years.

Asteroid 2012 D14 however, is about three times the size of Friday’s Russian meteor. 2012 D14 has a diameter of approximately 45 meters (or about 150 feet) across, with an estimated mass of about 130,000 metric tons. The odds of an NEO of that size encountering Earth are much slimmer, approximately once every 700 years.

Applying some basic math, the odds of a 15-meter asteroid impacting Earth on the same day as a 45-meter asteroid’s near miss are approximately 1 in 26,500. For comparison purposes, that’s about the same odds a New Yorker had in 2011 of dying in a car accident, while this double asteroid whammy is 6,000 more likely than the odds you will win the next $50 million Powerball lottery (1 in 175,000,000).

I still kept wondering, however, if there was another more likely explanation than random chance for these two asteroids showing up on the same day. One of the hallmarks of science is that it seeks to explain observations and phenomena as simply as possible.

Shoemaker-Levy 9 and Multiple Collisions with Jupiter

There is precedence for large objects such as comets and asteroids breaking apart, resulting in multiple impacts with a planet. In July 1992, Comet Shoemaker-Levy 9 (formally known as Comet D/1993 F2) broke apart after a close encounter with Jupiter — Jupiter’s tidal forces tore the comet into fragments ranging up to 2 km (1.2 mi) in diameter. Then two years later, at least 21 fragments of Shoemaker-Levy 9 collided with Jupiter and were observed burning up in its atmosphere over a six day period.6

Could Asteroid 2012 D14 have broken into two (or more) pieces in the past, with one of those fragments hitting Earth this past Friday while another larger fragment zipped past on a near miss? The main piece of evidence against this is that the object which exploded over Russia Friday apparently approached Earth from a different direction than 2012 D14 did. If they had been fragments of the same original asteroid, both would have approached Earth on roughly the same trajectory.

There’s a Bad Moon on the Rise

But even after seeing that Asteroid 2012 D14 and the Russian Meteor had approached Earth from different directions, my mind7 kept wondering if there could still be a connection. And then the light bulb went on in my head! What if (I thought to myself) the Russian meteor had been on roughly the same trajectory as Asteroid 2012 D14 and had actually passed Earth several days before  2012 D14 arrived? And what if that meteor had missed Earth at roughly the distance of the Moon’s orbit? Because it was such a dark asteroid, we didn’t see the Russian asteroid on Friday until it became a fireball in Earth’s atmosphere, so it’s completely plausible that we would have missed an earlier pass by that same asteroid. So imagine the Russian meteor missing Earth, but then getting so close to the Moon that the Moon’s gravity slingshot it back right at the Earth. By the time we’d first see it in the skies over Chelyabinsk, it would be traveling in almost the opposite direction of it’s original trajectory (and look like it had come from somewhere different than Asteroid 2012 D14 did).

I quickly began checking the trajectory information available for the Russian meteor and comparing that to the Moon’s position over the last several days.8 Alas, my hypothesis imploded when faced with actual data and orbital mechanics. The Moon was nowhere near where it needed to be for my “lunar slingshot” idea to have occurred.

Ultimately my really crazy (yet cool) hypothesis about Asteroid 2012 D14 and the Russian meteor being fragments of the same object wasn’t supported by the facts. So unless someone else comes up with a better idea, I’ve accepted that the fact both asteroids showed up on the same day really was a coincidence.