Articles examining the world of marketing. 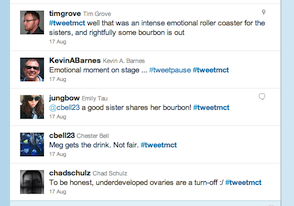 The use of cell phones and social media is normally discouraged during a live play, but the Milwaukee Chamber Theatre has begun using Twitter to its advantage during select performances. They’ve invited members of Milwaukee’s Twitterati to attend and tweet1 one performance of each play in the Cabot Theatre.

On Wednesday, August 17, 2011 I was one of nine individuals2 who tweeted the Chamber Theatre’s current production of Crimes of the Heart.3 All of our tweets were tagged with #tweetmct so people not attending the performance could follow along. … 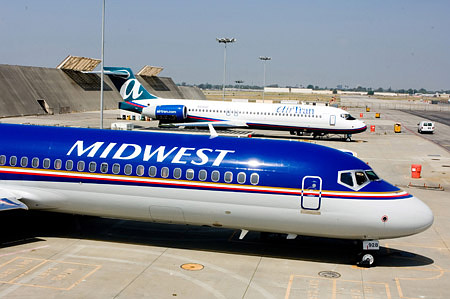 As a long-time Midwest Airlines customer, it was very very mixed feelings that I watched yesterday’s press conference announcing that the Midwest name is going away (to be assimilated into the Frontier Airlines brand).

During the 1990s, I frequently flew Midwest1 for work. So for me, the Midwest brand has always been defined by the focus on the business traveler that the airline pursued in those days — large leather seats for every passenger (not just first class), gourmet in-flight meals accompanied by linen napkins and real silverware, and of course the smell of homemade chocolate chip cookies baking in the plane.2 The reality is that those customer perks didn’t disappear with yesterday’s press conference ... they’ve been gone (with the exception of the chocolate chip cookies) for many years. …

The Best Care in the AirRead More » 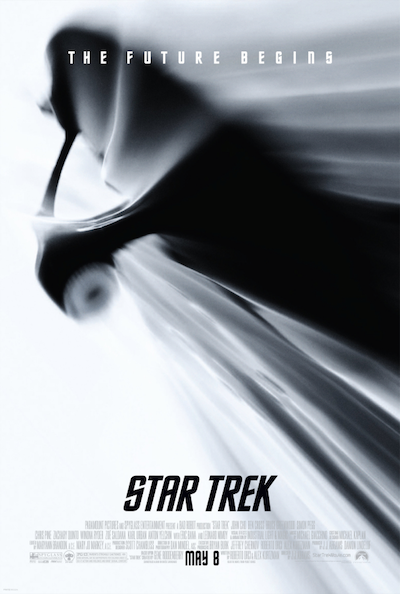 The Hollywood studios have become masters of successful marketing. Even in a bad economic environment, they create extensive campaigns that reach prospective customers in almost every facet of their lives. (And most importantly, they get those people into the theater.) By looking at what those studios do that works, you can find marketing lessons to apply when you want to turn your product or service into a blockbuster.

One great current example is the marketing campaign for the new film Star Trek.1 Producer J.J. Abrams2 and the Paramount marketing team have put together an extensive, integrated campaign which is already generating awareness of — and excitement about — the upcoming film.

Components of the marketing campaign include: Theater Advertising — The campaign kicked off in January 2008 (17 months before the première) with the first Star Trek movie trailer shown in theaters (and then during the 2008 Super Bowl). The second theatrical trailer (November 2008) ran before the Bond film Quantum of Solace. Daniel Craig’s second Bond film was highly anticipated and thus almost guaranteed a blockbuster opening weekend, so Paramount’s choice to attach a Star Trek trailer before that film was a great way to get it in front of a large audience and start building awareness.

Publicity Tour / Interviews (PR) — After the first theatrical trailer, the actors, producers and writers from Star Trek traveled the interview circuit. Initially interviews were given to very targeted publications and websites, so the messages could be tailored for specific audiences. For example, when talking to magazines and websites targeted at Trekkies, the message focused on how the film “respected” the 40 years of Trek that had come before.3

Television Advertising — Paramount followed up with a Super Bowl ad in February 2009. This particular ad played up the action aspects of the movie, clearly targeting the Super Bowl audience and avoiding the techno/nerd factor normally associated with Star Trek.

Online Content — Paramount rolled out several new websites4 to promote the film and has been posting new content on a regular basis. In addition, webmasters of Star Trek fan sites and science fiction websites were solicited early on to become part of the web campaign. Paramount provides those webmasters with exclusive photos, videos and other content connected to the film in exchange for repeated coverage on those websites.

Social Media —Almost as soon as production began on the film, Paramount set up official Facebook and MySpace pages for Star Trek, and using those social networking sites to provide special items (i.e., computer screen savers and wallpaper) to individuals who sign up as friends.

Special Events and Word-of-Mouth —One of the most effective marketing moves thus far was a surprise showing of the film to an audience of unsuspecting Trekkies on April 6 in Austin, TX.5 This event accomplished two things for Paramount. It generated publicity simply for successfully pulling off such a stunt. But more imporantly, those hundreds of rabid Trek fans6 who saw the surprise sneak preview have been blogging and instant messaging and phoning and Tweeting and just generally telling everyone about their experience and how great the film was.

Alternate Reality Game (ARG) — Perhaps the most unique marketing initiative for Star Trek has been the Alternate Reality Game, or ARG. The ARG (which continues to unfold) has players around the world hunting down clues to solve a complex puzzle created by the filmmakers. Clues can be found buried within static on secret websites, in graffiti seen at international Star Trek parties, and even embedded in a piece of futuristic technology dropped on a Paris street corner.

Nontraditional Media — Tired of people making fun of your Trek obsession? Download the iPhone Phaser App and stun them, complete with authentic Star Trek sound effects and movie trailers for your iPhone. Well, you get the idea …

So what does this tell you about your marketing efforts?

Full Disclosure: Kevin recently won tickets to the May 6 Milwaukee première of Star Trek. And he’s also seen Wrath of Khan a couple dozen times. But he’s not a Trekkie.7 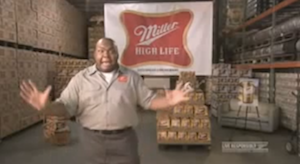 Miler-Coors announced today that it has purchased time and will run a 1‑second ad during Super Bowl XLIII on February 1. Yes, that’s not a typo — the commercial for Miller High Life will be just one single second in length.

A supporting website is already live and informs visitors:

“Paying $3 million for a 30-second commercial makes about as much sense as putting sauerkraut on a donut. Actually, even that makes more sense. We’d rather have our message short and to the point, if it means delivering more honest beer at a tasty price.”

At the very least, the gimmick of running a Super Bowl ad only 1‑second in length will generate lots of free media attention. It will also get viewers thinking about the ad before it even airs, wondering what can Miller do/say/show in just one second. To help the process, the 1secondad.com website1 contains several micro-ads that didn’t make the cut. (My favorite has the Miller High Life delivery guy standing in a warehouse, surrounded by cases of Miller, and saying simply “One Mississippi.”) The ad’s length also will work in its favor after the Super Bowl. When various TV news and sports programs try to decide which 2–3 Super Bowl ads they have time to show in their reports, the Miller ad will be an obvious choice — after all, it only takes one more second to show the Miller ad.

The 1‑second ad also has some potential drawbacks. This is one case where “blink and you’ll miss it” could literally be true. If you’re looking anywhere except at the TV screen when the ad airs, by the time you react and turn to look the ad will be over. There may be people that feel the 1‑second approach is too gimmicky and dismiss the ad outright. And ultimately this is just one second for Miller against 270 seconds of Budweiser ads (two 60-second ads and five 30-second ads).

Finally, I have to comment on the wording of the opening message on the 1secondad.com website. At first, I thought it might be a mistake where the website says “honest beer at a tasty price” — I momentarily wondered whether it was supposed to say “tasty beer at an honest price” and someone screwed up. The more I thought about it, however, the more I realized that by flipping that phrase Miller was emphasizing some core brand attributes. “Honest beer” is a message embodied in the ongoing High Life delivery guy campaign, while “tasty price” evokes a price so good that you’ll crave it. Kudos to that copywriter!

Google announced today that it is ending it’s Print Ads program which packaged and sold advertising space in over 800 U.S. newspapers. Apparently the program, which started in 2006, hasn’t lived up to expectations for generating revenue. …

Another omen for newspapersRead More »