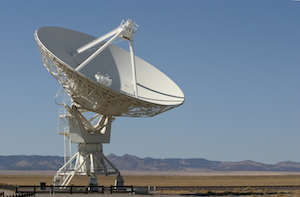 Are humans alone in the universe?

The Drake Equation is an attempt to summarize the factors that determine humans’ ability to communicate with an extraterrestrial civilization. This is accomplished by providing a simple formula to calculate the number of civilizations in our Milky Way galaxy from which we potentially could receive a signal.

Shortly after humanity’s first search for an extraterrestrial radio signal (conducted in 1960 at Green Bank, West Virginia — a search known as “Project Ozma“1 ), the very first scientific conference on searching for extraterrestrial intelligence took place. Astronomer Frank Drake (who was behind Project Ozma) came up with a simple equation — now called “the Drake Equation” — to frame the agenda of that 1961 conference.

Drake initially identified seven factors that impact our likelihood of receiving radio signals from other civilizations:

Caution: The Drake Equation is not (and was not) intended to provide a definitive value for the number of civilizations in our galaxy transmitting radio signals. Instead Frank Drake meant to identify the factors that would be important in determining that number, as well as guide possible research related to life in the universe.

By better understanding these seven speculative factors (even if we aren’t able to estimate an accurate value for each factor), Drake hoped to both emphasize the validity of searching for extraterrestrial radio signals and stimulate intellectual curiosity about life in the universe.

Let’s look more closely at each of the seven factors.

Thanks to increasingly detailed observations of star-forming regions in our galaxy, as well as continuous refinements to the theory of stellar evolution, astronomers have a reliable estimate of the average number of stars born in our Milky Way galaxy every year.

Fraction of Stars with Planets

The current search for exoplanets has illustrated how common planets are, and the number of known exoplanets keeps increasing. Using multiple techniques for detecting such exoplanets, astronomers are finding planets orbiting nearly every star they examine, including the types of star systems (such as binaries) where they previously believed planets in stable orbits were unlikely to exist.

As our ability to detect exoplanets improves, astronomers are finding smaller and smaller planets — we are now at the threshold where exoplanets similar in mass to Earth are being found. This past November, scientists with NASA’s Kepler mission estimated that 22% of Sun-like stars have Earth-sized planets orbiting in their habitable zone.2 A star’s habitable zone is that area around a star within which a planet can have abundant liquid water on its surface — in other words, the planet is the right distance from its star that it’s neither too hot nor too cold for liquid water.

The final four factors of the Drake Equation are complete unknowns because — with the exception of our own case (humans)— we have no data from which to formulate hypotheses or make estimates. As a result, estimates for the values of these four factors are the most contentious among scientists.

The only planet where we know with certainty that life has arisen is Earth. The fact that life exists here, however, tells us almost nothing about the likelihood of life arising elsewhere. Generalizing about all of the other planets in the universe based on one single case is considered faulty reasoning. The geological evidence on Earth indicates that life here began quickly, very soon after our planet had cooled to where liquid water could exist — but is that typical of habitable planets or an exception? To further complicate matters, scientists have a limited understanding — and frequently do not agree — about what specific conditions are necessary for life to arise. For example, we know from extremophiles found on Earth that life can exist in some fairly inhospitable environments, but what are the limits of too hot, too cold, too acidic or too much radiation beyond which life cannot arise?

If life is discovered anywhere else (such as on Mars, or on one of the moons of Jupiter or Saturn), our understanding of this factor of the Drake Equation will change overnight. Once we have the ability to study two (or more) instances where life arose, we can seek out commonalities and better define those conditions necessary for the emergence of life.

This factor also is controversial. Some argue that out of the billions of species that have existed on Earth, only one (humans) has achieved intelligence, thus the value for fi must be very small. In addition, although life appears to have arisen quickly on Earth once conditions allowed, it took most of the period during which life existed on Earth before intelligent life arose. Thus while it might be relatively easy for life to emerge on a habitable planet, the emergence of intelligent life might be significantly more difficult. Others strongly disagree, pointing out that all of this is based solely on what occurred on Earth, one planet out of billions.

When Frank Drake originally created the equation, this factor referred to the fraction of intelligent life that were broadcasting radio signals into space, but today it is generally interpreted as those civilizations that are releasing any detectable signs (radio signals, as well as other signs) of their existence into space. Like the previous two factors (fl and fc), the only example we have is our own (and making generalizations based on just that one example is unreliable).

It also is important to note that although humans have possessed the ability to broadcast signals into space for nearly a century, we only have done so on a few limited occasions.3 Thus estimating a value for this factor not only assumes that a civilization possesses the technology to send signals into space, but also assumes it has the desire to do so and actively employs its ability.

This final factor is dependent more on sociology than on astronomy or biology, which makes its value the most difficult to determine. Even our own case doesn’t provide a single complete data point. We know that human civilization has been capable of broadcasting signals into space for a little less than one century, but we don’t know how long that ability will continue into the future. Humanity could end next month (a large undetected asteroid, for example, could seal our fate), or we might be broadcasting signals for the next million years.

Estimating the lifetime of communicating civilizations becomes even more uncertain when we realize we are dealing with alien sociology. There is no reason to assume that intelligent aliens think like humans or possess the same drives and motivations. While humans appear inclined toward warfare (which — given our ever-increasing levels of destructive technology — could someday end the lifetime of our civilization), we have no idea whether that would be the case for other intelligent life.

Estimates of The Drake Equation

The Drake equation can result in a very wide range of values, depending on the assumptions. Thanks to the existence of humans (an intelligent form of life capable of transmitting signals into space), however, we know that at least one civilization exists in the Milky Way galaxy that is capable of transmitting radio signals. That single fact establishes a lower limit for many of the factors in the Drake equation.

Ultimately, we do not have reliable estimates for several of the factors of the Drake Equation, meaning the results for N can vary wildly. Proponents of the Rare Earth hypothesis conclude that there is only one planet with intelligent life in the galaxy (and perhaps in the entire universe) — Earth.4 On the opposite end of the spectrum, scientists using larger values for the unknown factors in the Drake Equation have estimated there could be as many as 36.4 million radio-transmitting civilization in our Milky Way galaxy. 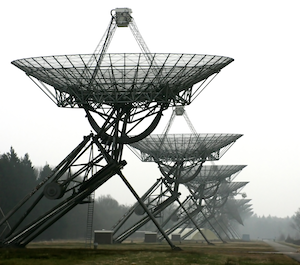 During a lunch in 1950, physicist Enrico Fermi and several colleagues were discussing UFO reports and the likelihood that intelligent civilizations might exist elsewhere in the universe. At that time (over a decade before Frank Drake formulated the Drake Equation), many scientists speculated that Earth might be an “average” planet, meaning other planets with life — and even intelligent life — potentially existed in the universe. Fermi postulated that given intelligent life’s tendency to colonize new habitats (based on the existence of that tendency in humans), by now (13.8 billion years into the life of the universe) the colonization efforts of at least one technologically advanced civilization would have reached Earth’s galactic neighborhood and we would have seen/heard/found evidence of their existence. Thus Fermi asked his lunch colleagues the question, “Where is everybody?”

Our experience since Fermi asked that question (now known as the “Fermi Paradox”) has only deepened the apparent mystery. Despite over a half century of searches, no definitive5 extraterrestrial radio signals have been detected. In this case, actual observation seems to trump the thought experiments behind the Drake Equation.

At face value, the Fermi Paradox seems to imply that there are no non-human civilizations in our galaxy at this time or in the observable past. The Paradox also may simply mean, however, that there is something key about the Drake Equation that we don’t understand. For example, perhaps technological civilizations spend only a very short period of time (i.e., a century) using radio signals for communication (the fc factor in the Drake Equation), then they discover and utilize some other means of communications which humans cannot yet detect (or even predict).

Ultimately, although there is no unique solution to the Drake Equation, it is a generally accepted tool used by the scientific community to examine the specific factors thought to play a role in the development of extraterrestrial civilizations. Today, the equation still serves as a road map of what we need to learn in order to understand how common (or how rare) intelligent life is in the universe.