European astronomers announced yesterday the discovery of a planet similar in mass to Earth orbiting Alpha Centauri B. Details of the discovery will appear today in an online paper published in the scientific journal Nature. The planet was discovered using the “wobble method” where astronomers watch for wobbles in the motion of a star that indicate the gravitational presence of a planet. 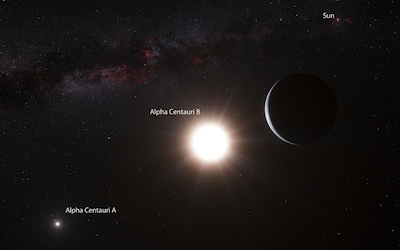 This is major news for several reasons. First, the Alpha Centauri system is the nearest star system to Earth.1 This means if humans develop the technology to travel to other stars, the Alpha Centauri system will be the easiest to reach (simply because it is closer to us than any other star system). The fact that this extrasolar planet (exoplanet) is so close to Earth also makes it potentially easier for astronomers to study than the many2 previously discovered exoplanets, all of which are located dozens or even hundreds of light years away from Earth.

Second, this is the first Earth-size exoplanet discovered orbiting a star similar to Earth’s own Sun. The newly discovered planet orbits Alpha Centauri B, a yellow star that overall is very like our Sun, although slightly smaller and less bright than the Sun. This discovery means it now is more likely astronomers will find other Earth-sized planets orbiting stars like our Sun.

The bad news (if you can say there is any bad news in a discovery such as this) is that this Earth-sized planet is orbiting extremely close to Alpha Centauri B, meaning it’s surface is likely very hot compared to the surface of the Earth. In other words, it is unlikely that life (as we currently understand it) could live on the planet. But the existence of this exoplanet may mean there also are other, more Earth-like planets orbiting Alpha Centauri B. “(I)t may well be just one planet in a system of several,” said Stéphane Udry (Geneva Observatory), a co-author of the paper announcing the discovery.

For those stargazers among you, Alpha Centauri B is one of the brightest stars visible from Earth (due to how close it is to Earth), but unfortunately it is only visible from the Southern Hemisphere. (Time for an astronomy vacation in Australia, anyone?)

The Alpha Centauri system actually consists of three stars — two stars similar to the Sun orbiting close to each other (designated Alpha Centauri A and B) and a more distant and faint red component known as Proxima Centauri. Astronomers have speculated for over a century about the possibility of planets orbiting these bodies, but it only became possible with current planet-hunting technology to actually detect such planets in the Alpha Centauri system.

As such exoplanet discoveries continue, it is safe to say there are more surprises and big announcements ahead. We really do live in interesting times!