On Wednesday, February 26, 2014 — one day after the release of his new book, The Future of the Mind — theoretical physicist Michio Kaku1 spoke to a standing room only audience at Milwaukee’s Boswell Book Company about the future of the human mind.

Kaku said he interviewed over 300 of the world’s top scientists for his new book.2 “Let me tell you what they tell me about the future of the mind,” he began. “In the last five to ten years, we’e learned more about the mind than in all human history combined.”

“Sitting on your shoulder is the most complex object in the known universe,” Kaku explained. “We physicists calculate that to create a computer that can simulate the brain, the computer would be the size of a city block, it would use the power of a nuclear power plant and you’d have to have a river to cool it down.”

The amount of brain research underway continues to grow. “President Barack Obama last year announced that upwards of a billion dollars will be [put] into The Brain Project,3 ” said Kaku. “The Europeans [and] the Americans will invest a billion dollars — that’s billion with a ‘B’, not an ‘M’ — in order to decipher the workings of the human mind.” 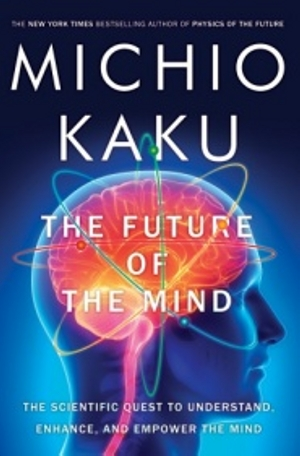 During his talk, Kaku took fictional ideas about the future of the mind from blockbuster science fiction movies, then shared the reality of what’s happening in current brain research.

The Matrix: Characters can download their minds into a computer simulation.
Total Recall: Memories indistinguishable from reality are inserted into characters’ minds.

Reality: “Just last year, the world’s first experiment was successful,” said Kaku. “We uploaded a memory into a mouse.” He explained that the goal is not to create uploadable vacation memories, but instead to create a memory chip (what Kaku calls a “brain pacemaker”) to help Alzheimer’s patients remember.

Other possibilities that Kaku can see arising from the ability to download/upload memories include:

Ironman: An exoskeleton controlled by the user’s mind provides abilities greater than those of the user’s body.
Surrogates: Humans spend their existence in control pods and remotely control perfect versions of their bodies.

Reality: “My colleague Stephen Hawking,” explained Kaku in one of the most amazing revelations of the evening, “there is a chip [in Hawking’s eyeglasses] which is a radio antenna, picks up messages from Stephen’s brain, converts them to messages on the laptop computer and he can type. It’s a very clumsy way, but he can actually type by thinking about it.” Kaku added that already in few cases, paralyzed individuals have been connected to robotic limbs via a dime sized chip in their brain, allowing them to operate rudimentary exoskeleton limbs.

Man of Steel: Superman’s father’s memories and personality are downloaded when he dies and continue to exist within a computer.

Reality: “Some people think immortality could be a byproduct of President Barack Obama’s Brain Initiative,” Kaku told the audience, “if we have a disk called ‘Brain 2.0′ . . . ‘You 2.0’ that lives forever.” In the future, when you die, “your disk will live on with your personality, your memory, your personality quirks, your secrets.” Then one day your great, great, great, great grandchildren potentially could visit a library and have a conversation with you.

During his Boswell talk, Dr. Kaku also touched briefly on a variety of other brain topics, including injury induced super-genius and super-religiousity, brain mapping, attempts to photograph dreams4 and the strange but true history of Einstein’s brain since he died.5

The future of what we can do with our minds may seem beyond what we can imagine, but after hearing Dr. Michio Kaku speak, I wonder if even the limits of imagination might be enhanced someday.