The likelihood of life existing somewhere other than Earth depends on several key factors, chief among them being the number of planets (and moons) in the universe where life could survive.1 Two recent studies indicate there may be many more worlds that are hospitable for life than we previously thought. 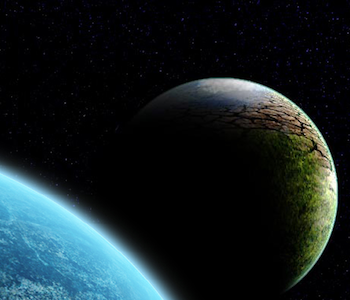 Traditionally, astrobiologists have treated Earth as the template for what other habitable worlds might look like. After all, Earth is the one place in the universe where we know with absolute certainty that life exists, plus we are intimately familiar with the conditions that make Earth habitable. Most of our searches for habitable worlds outside our solar system, in fact, have focused on finding planets nearly identical to Earth in terms of mass, surface temperature, etc.

On January 16, René Heller (McMaster University, Ontario, Canada) and John Armstrong (Weber State University, Ogden, Utah) published a research paper2 making the case that although Earth-like planets might be habitable to life, perhaps they are not the most habitable options. As Heller and Armstrong put it, “(s)cientists have developed a language that neglects the possible existence of worlds that offer more benign environments to life than Earth does.”

Given these and several other planetary characteristics for which Heller and Armstrong determined habitability maximums, they conclude that terrestrial planets two or three times the mass of Earth are most likely to be superhabitable.

“Terrestrial planets that are slightly more massive than Earth, that is, up to 2 or 3 M, are preferably superhabitable due to the longer tectonic activity, a carbon-silicate cycle that is active on a longer timescale, enhanced magnetic shielding against cosmic and stellar high-energy radiation, their larger surface area, a smoother surface allowing for more shallow seas, their potential to retain atmospheres thicker than that of Earth, and the positive effects of non-intelligent life on a planet’s habitability, which can be observed on Earth.”

As we know from Earth, life is not restricted to the surface of a planet. Earth possesses a “deep biosphere” that extends at least several kilometers below the surface. We also know that subsurface water can remain liquid due to internal planetary heating and such subsurface liquid water can exist well outside a star’s habitable zone.6 Building on those facts, the UK team introduced the concept of a subsurface-habitability zone (SSHZ) to “denote the range of distances from a star within which rocky planets are habitable at any depth below their surfaces up to a stipulated maximum.”

The team also showed how to use a world’s temperature, depth and orbital distance to estimate SSHZs. McMahon, O’Malley-James and Parnell ultimately conclude that SSHZs for most stars are several times wider than conventional habitable zones, meaning there are many more planets and moons that are hospitable to life than we previously believed. For example, if life can exist 10 kilometers below the surface of a planet or moon, that would mean a star’s SSHZ potentially would be 14 times wider than its conventional habitable zone.

An Abundance of Life?

Starting with the hundreds of exoplanets discovered during the last five years, our understanding of how many worlds exist beyond our Solar System has skyrocketed. Now, through research such as the two studies described in this article, the percentage of those worlds which might be habitable is rising. Earth may not even be a typical example — other planets may have conditions that are better for the existence of life. Thanks to the ever-increasing number of candidate worlds where life could exist, the odds of our finding life beyond Earth are increasing as well.

When it comes to finding life — and especially finding intelligent life — elsewhere, however, the number of habitable worlds is only one of several factors at play. Check back on Tuesday, January 28 for an in-depth look at the Drake Equation, which lays out the factors important in estimating the number of civilizations that might exist in our galaxy.