“Pay no attention to that fast-moving asteroid...”

One of my Astrobiology instructors (Eric M. Wilcots) began class this past Monday with a slide labeled “Pay no attention to that fast-moving asteroid...“1 Prof. Wilcots was talking about Asteroid 2012 D14 which will make an extremely close approach to Earth this Friday, February 15, 2013. And ultimately his point was that although 2012 D14 will pass within a mere 17,200 miles of Earth’s surface,2 it will not hit Earth or bring about a Bruce Willis level disaster. 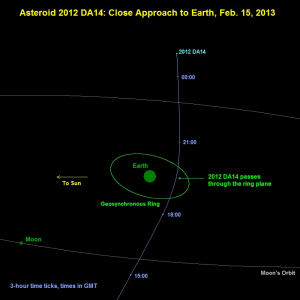 For the record, 2012 D4 isn’t even that large — astronomers estimate it is only about 45 meters (or about 150 feet) across, with an estimated mass of about 130,000 metric tons. So even if things had gone differently and it had ended up on a collision course with Earth (which, once again, IT’S NOT!), it wouldn’t have caused any Earth-shattering,3 civilization-ending event.4

This asteroid flyby won’t be visible to the naked eye (and the nearest portion of the flyby will occur roughly over Australia), but you can watch the entire event live on the Clay Center Observatory’s Ustream channel. Clay Center Observatory will offer real-time, high-definition video — weather permitting — from Friday 5:00 PM Milwaukee time (6:00 PM EST; 22:00 UTC) until 3:00 AM Saturday morning (4:00 AM EST; 9:00 UTC on February 16).

While you’re waiting for Friday’s live video, here’s an animation created by NASA JPL showing what the flyby might look like from the asteroid’s point of view:

What does a Near Earth Object (NEO)5 have to do with Astrobiology? In the past, an NEO impact on the Earth was responsible for at least one mass extinction6 event — the impact 65 million years ago that killed off the dinosaurs and many other species.7 But in addition to ending life, NEOs also appear to play a role in making planets and moons more hospitable to life. Asteroid and comet impacts can deliver organic molecules and water to a potentially habitable world, increasing (we think) the likelihood that world can support life.

How’s that for something to ponder while asteroid 2012 D14 zips past on Friday evening?

One thought on ““Pay no attention to that fast-moving asteroid...””