Welcome to Stargazing, the first in an ongoing series of monthly guides to what’s coming up in the night sky, as well as what major space events are scheduled during the coming month.

Curiosity Rover to Land on Mars 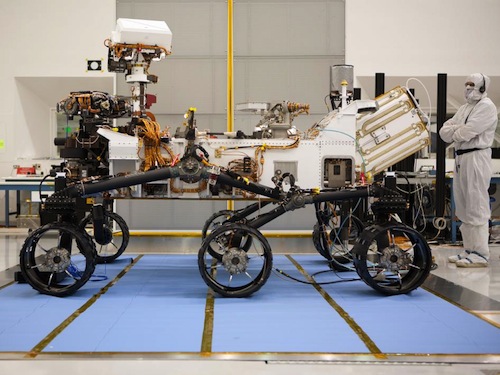 The biggest news during August will be the landing of the Mars Science Laboratory and Curiosity Rover1 in the early hours of Monday, August 6.

Curiosity carries the most advanced scientific gear ever used on the surface of Mars. Its assignment: “Investigate whether conditions have been favorable for microbial life and for preserving clues in the rocks about possible past life.” Over a period of at least 23 months, Curiosity will analyze dozens of samples drilled from rocks or scooped from the ground. The six-wheeled Curiosity (over 10 times as massive as earlier Mars rovers and roughly the size of a Mini Cooper)2 isn’t limited to exploring just around it’s landing site — it will travel far greater distances than any previous Mars rover.

As someone who has been watching Mars exploration ever since the Viking landers in July 1976, I can say that the landing of Curiosity on Mars promises to be the most exciting, nail-biting mission to the Red Planet that NASA has ever attempted. Don’t believe it? Check out this short video from NASA that describes the landing. The video — aptly titled “Seven Minutes of Terror” — has quickly become NASA’s most watched video ever. And that video is only a teaser for the real footage we’ll get from Mars. Curiosity has High-Definition stereo cameras mounted at the top of the rover’s instrument mast, which means we’ll be able to watch 3D HD video of the surface of Mars.3 NASA-TV’s live coverage of the landing begins on Sunday, August 5, 2012 at 10:30 PM Central Time. If you don’t get NASA-TV on your cable system,4 the coverage will also be live streamed on NASA’s Ustream channel on the web.

For the most up-to-date information on Curiosity, visit NASA’s mission page.  And being a hip and trendy social rover, Curiosity also has it’s own Twitter account you can follow: @MarsCuriosity

This year, the annual Perseids meteor shower will peak beginning on the evening of Saturday, August 11 and continuing into the early morning of Sunday, August 12. The best time to watch the Perseids will be 10:00 PM to 1:00 AM local time. If you can find a location away from city lights, you likely will be able to spot 60 to 80 meteors every hour during that time. The Perseids are bright and fast moving, which makes them easy to pick out against a background of stars. Since meteors move so fast and cover large distances, it is essentially impossible to try and see them through a telescope or binoculars. Instead, look toward the northeast portion of the sky and the Perseids will be clearly visible to your naked eyes.

What are the Perseids? Perseid meteors are chunks of rock that have broken off from Comet 109P/Swift-Tuttle. Every year in mid-August the Earth’s orbit passes through that patch of rocks. What you are seeing during the meteor shower are those unlucky rocks that collide with the Earth’s atmosphere and burn up as they streak overhead.5 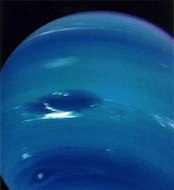 If you are comfortable using a telescope for stargazing, August is a great month to look for Neptune (the planet most distant from the Sun, since Pluto’s demotion to “non-planet thingamoid“6 ). Neptune reaches opposition7 on August 24 and thus will be visible all night. Unfortunately even at a time like this when Neptune is at it’s brightest, you still will need to use binoculars or a telescope to see the planet (and even then, it will appear as merely a tiny blue dot). If you’re up for the challenge of locating Neptune in the night sky (it currently can be found amidst the stars of Aquarius), the Sky & Telescope website has a downloadable/printable star map showing exactly where to point your telescope or binoculars.

August features two full moons, the first on August 1 and the second8 on August 31. Although the lunar surface during a full moon often is too bright for quality telescope viewing,9 a full moon always delivers a great naked-eye viewing experience. My advice? Grab a blanket, bottle of wine10 and a couple of glasses, and take that special someone for a moonlight picnic. (That’s also great advice for the night of August 11 when the Perseids meteor shower peaks.)

In closing, since this is the first issue of Stargazing, I’d like to hear what you’re interested in learning or hearing about each month. Whether you’d like printable star maps, more news about the latest in space exploration, guides to astronomy-related destinations here on Earth, or just need basic tips of what to watch for in that month’s skies, let me know in the comments section.

Until next time, keep looking up...because that’s where the excitement is!